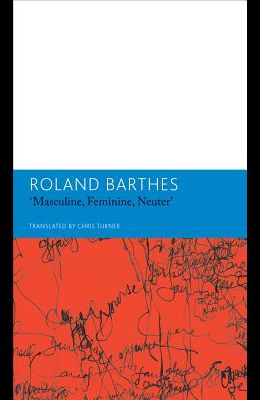 Last season, Seagull Books published the first three volumes in a new series collecting essays and interviews by the late French thinker Roland Barthes. This season they'll bring the five-volume set to completion with the publication of Masculine, Feminine, Neuter and Signs and Images . Masculine, Feminine, Neuter, consists of Barthes's writing on literature, covering his peers and influences, writers in French and other languages, contemporary and historical writers, and world literature. This volume comprises Barthes critical articles and interviews previously unavailable in English. Taken together, the five volumes in this series are a gift to Barthes' many fans, helping to round out our understanding of this restless, protean thinker and his legacy.

List of All Editions of Masculine, Feminine, Neuterand Other Writings on Literature: Essays and Interviews, Volume 3