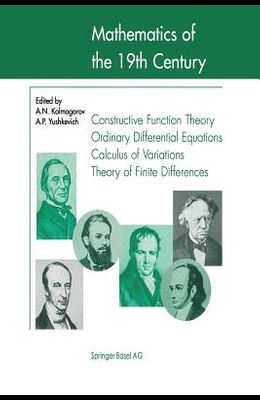 Mathematics of the 19th Century: Function Theory According to Chebyshev Ordinary Differential Equations Calculus of Variations Theory of Finite Differ

by
and A N Kolmogorov and A P Yushkevich
$109.99
Select Format

The editors of the present series had originally intended to publish an integrated work on the history of mathematics in the nineteenth century, passing systemati- cally from one discipline to another in some natural order. Circumstances beyond their control, mainly difficulties in choosing authors, led to the abandonment of this plan by the time the second volume appeared. Instead of a unified mono- graph we now present to the reader a series of books intended to encompass all the mathematics of the nineteenth century, but not in the order of the accepted classification of the component disciplines. In contrast to the first two books of The Mathematics of the Nineteenth Century, which were divided into chapters, this third volume consists of four parts, more in keeping with the nature of the publication. 1 We recall that the first book contained essays on the history of mathemati- 2 cal logic, algebra, number theory, and probability, while the second covered the history of geometry and analytic function theory. In the present third volume the reader will find: 1. An essay on the development of Chebyshev's theory of approximation of functions, later called constructive function theory by S. N. Bernshtein. This highly original essay is due to the late N. I. Akhiezer (1901-1980), the author of fundamental discoveries in this area. Akhiezer's text will no doubt attract attention not only from historians of mathematics, but also from many specialists in constructive function theory.

List of All Editions of Mathematics of the 19th Century: Function Theory According to Chebyshev Ordinary Differential Equations Calculus of Variations Theory of Finite Differ