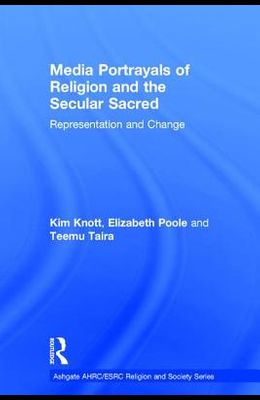 Media Portrayals of Religion and the Secular Sacred: Representation and Change

by
Kim Knott and Elizabeth Poole

Is it true that Christianity is being marginalised by the secular media, at the expense of Islam? Are the mass media Islamophobic? Is atheism on the rise in media coverage? Media Portrayals of Religion and the Secular Sacred explores such questions and argues that television and newspapers remain key sources of popular information about religion. They are particularly significant at a time when religious participation in Europe is declining yet the public visibility and influence of religions seems to be increasing. Based on analysis of mainstream media, the book is set in the context of wider debates about the sociology of religion and media representation. The authors draw on research conducted in the 1980s and 2008-10 to examine British media coverage and representation of religion and contemporary secular values, and to consider what has changed in the last 25 years. Exploring the portrayal of Christianity and public life, Islam and religious diversity, atheism and secularism, and popular beliefs and practices, several media events are also examined in detail: the Papal visit to the UK in 2010 and the ban of the controversial Dutch MP, Geert Wilders, in 2009. Religion is shown to be deeply embedded in the language and images of the press and television, and present in all types of coverage from news and documentaries to entertainment, sports reporting and advertising. A final chapter engages with global debates about religion and media.