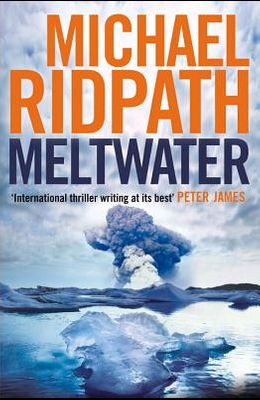 Book #3 in the Fire and Ice Series
by
Michael Ridpath

The third book in the Fire & Ice series featuring Icelandic detective Magnus Jonson FreeFlow, a group of internet activists committed to the freedom of information, have video evidence of a military atrocity in the Middle East and have chosen Iceland as their HQ while they prepare to unleash their greatest coup on the world's media. On the glacial rim of erupting volcano Eyjafjallajokull, minutes after they christen their endeavor Operation Meltwater, one of them is murdered. The list of people Freeflow has antagonized is long--the Chinese government, Israeli military, a German Bank, Italian politicians, even U.S. college fraternities. Magnus Jonson has a long list of suspects but he's getting precious little help from FreeFlow--for an organization dedicated to the transparency of information, they're a secretive bunch. But they are not the only ones with secrets. Asta, a newly qualified priest, has contacted FreeFlow with information about a scandal in the church. Her involvement with FreeFlow will cost her dearly. And with the return of Magnus's brother Ollie to Iceland, the feud that has haunted their family for three generations is about to reignite.

Fire and Ice Series In Order - By Michael Ridpath