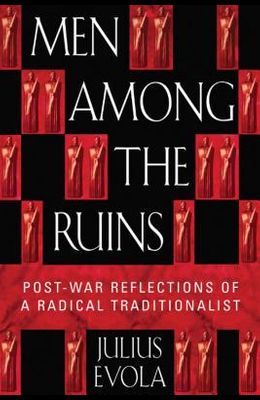 Men Among the Ruins: Postwar Reflections of a Radical Traditionalist

Julius Evola's masterful overview of the political and social manifestations of our time, the age of decline known to the Hindus as the Kali Yuga. - Reveals the occult war that underlies the crises that have become a prevailing feature of modern life. - Includes H. T. Hansen's definitive essay on Evola's political life and theory. Men Among the Ruins is Evola's frontal assault on the predominant materialism of our time and the mirage of progress. For Evola and other proponents of Traditionalism, we are now living in an age of increasing strife and chaos: the Kali Yuga of the Hindus or the Germanic Ragnarok. In such a time, social decadence is so widespread that it appears as a natural component of all political institutions. Evola argues that the crises that dominate the daily lives of our societies are part of a secret occult war to remove the support of spiritual and traditional values in order to turn man into a passive instrument of the powerful. Evola is often regarded as the godfather of contemporary Italian fascism and right-wing radical politics, but attentive examination of the historical record--as provided by H. T. Hanson's definitive introduction--reveals Evola to be a much more complex figure. Though he held extreme right-wing views, he was a fearless critic of the Fascist regime and preferred a caste system based on spirituality and intellect to the biological racism championed by the Nazis. Ultimately, he viewed the forces of history as comprised by two factions: history's demolition squad enslaved by blind faith in the future and those individuals whose watchword is Tradition. These latter stand in this world of ruins at a higher level and are capable of letting go of what needs to be abandoned in order that what is truly essential not be compromised.

Books similiar to Men Among the Ruins: Postwar Reflections of a Radical Traditionalist

List of All Editions of Men Among the Ruins: Postwar Reflections of a Radical Traditionalist