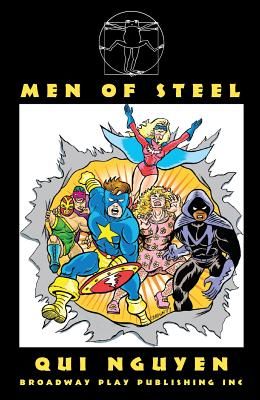 Three interwoven tales of people with superpowers, including the downfall of America's beloved Captain Justice, the adventures of Brooklyn's Los Hermanos Manos, and the tragic tale of an indestructible man, that ultimately collide inside the walls of a maximum security prison. A superhero story for adults. Captain America, who was killed this month in a comic book but is rumored to be returning to life in time for a movie, first came on the scene in 1941, back when a nervous nation was looking for a patriotic symbol of American power. But times have changed, and so have superheroes. In films like Batman Begins and television shows like Heroes, they are now more flawed, moody and ambivalent about power than ever. Qui Nguyen's MEN OF STEEL ... introduces audiences to Captain Justice, a crusader for the Iraq war era. A dead ringer for Captain America, including the tights and shield, he was created by the United States military and has dispensed with all kinds of villains, but he still has his critics. Some say he's made people dependent on 'supers, ' as they're called, and created safe havens in the outer boroughs by concentrating on Manhattan. And when he killed two murderers in an act of revenge, the man who fights for justice and the American way was tossed into prison ... the show belongs to the genre of gleefully lowbrow Off-Off-Broadway entertainments for overgrown adults. The prodigious onstage fights are not as elaborate as those in THE JADED ASSASSIN, the martial arts fantasy play, but this plot-rich piece, which begins with a murder and moves backward, has more to chew on. The plot centers on the friendship between Captain Justice and Maelstrom, a wealthy playboy with a collection of gadgets and a sexual secret. He's an angrier version of Batman. There are other superheroes as well, including Bryant, a drag queen whose power is that he doesn't feel pain, and Captain Justice's sidekick, Liberty Lady, who some suspect is merely a P R gimmick. Mr Nguyen has an appealingly clean style that mixes colloquial slang and hard-boiled detective fiction. ('Hope is only good for prisoners and bums playing the lotto.') Some of his comic ideas are truly inspired, like the mad villain, The Mole, who prefers making dramatic statements of intent to actually avoiding weapons hurled at him ... this is a fully realized and contained world that raises the skeptical question: If power corrupts, than what about super power? -Jason Zinoman, The New York Times