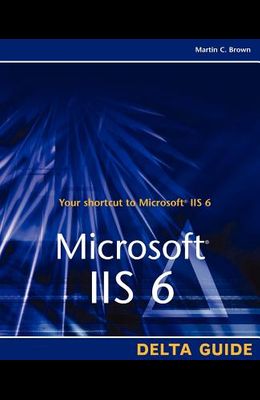 From the Back Cover MicrosoftAs Internet Information Server 6 is an Internet server program that works with the Windows Server 2003 operating system. IIS is MicrosoftAs answer in the Internet server market to Apache, the open source and #1 Internet server in use. In the US 9.7 million servers run IIS (28 percent of the market) powering 5.3 million .com domains. Delivered as a fee add-on for the Windows 2003 Server, IIS 6 is a major upgrade from version 5 with increased security, better .NET programming integration, and stronger abilities to work with non-Microsoft languages and servers. Companies using IIS Server as part of their backend systems include: Krispy Kreme, AT&T, Home Shopping Network, Rolling Stone.com, plus many others.

List of All Editions of Microsoft IIS 6 Delta Guide