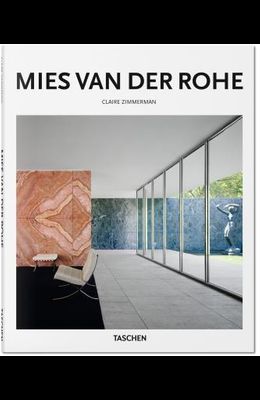 Less is more: Finding perfection in purity Famed for his motto less is more, Ludwig Mies van der Rohe (1886-1969) was one of the founding fathers of modern architecture and a hotly-debated tastemaker of twentieth century aesthetics and urban experience. Mies van der Rohe's philosophy was one of underlying truth in pure forms and proportions . With the help of contemporary technological and material developments, he sought a stripped-down purity to architecture, showcased by the likes of the Seagram Building and Farnsworth House . Some spoke out against this stark approach as the precursor to bland, generic cityscapes. Others cite Mies van der Rohe as the ultimate master of an abdingly elegant essence . This book presents more than 20 of Mies van der Rohe's projects from the period 1906-1967 to introduce his groundbreaking practice and influence in both America and Europe. About the Series: Each book in TASCHEN's Basic Architecture Series features: an introduction to the life and work of the architect the major works in chronological order information about the clients, architectural preconditions as well as construction problems and resolutions a list of all the selected works and a map indicating the locations of the best and most famous buildings approximately 120 illustrations (photographs, sketches, drafts and plans)

List of All Editions of Mies Van Der Rohe