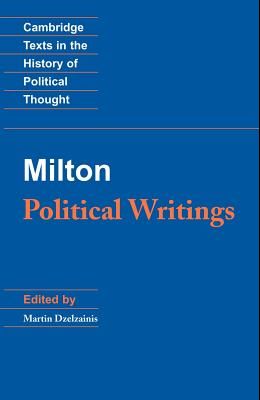 Part of the Cambridge Texts in the History of Political Thought Series
by
John Milton and Martin Dzelainis and Martin Dzelzainis
$43.47
Select Format

John Milton was not only the greatest English Renaissance poet but also devoted twenty years to prose writing in the advancement of religious, civil and political liberties. The height of his public career was as chief propagandist to the Commonwealth regime which came into being following the execution of King Charles I in 1649. The first of the two complete texts in this volume, The Tenure of Kings and the Magistrates, was easily the most radical justification of the regicide at the time. In the second, A Defence of the People of England, Milton undertook to vindicate the Commonwealth's cause to Europe as a whole. They are central to an understanding both of the development of Milton's political thought and the climax of the English Revolution itself. This is the first time that fully annotated versions have been published together in one volume, and incorporates a wholly new translation of the Defence. The introduction outlines the complexity of the ideological landscape which Milton had to negotiate, and in particular the points at which he departed radically from his sixteenth-century predecessors. Further aids to students include a full chronology of Milton's life and events, a select bibliography and biographies of persons mentioned in the text.