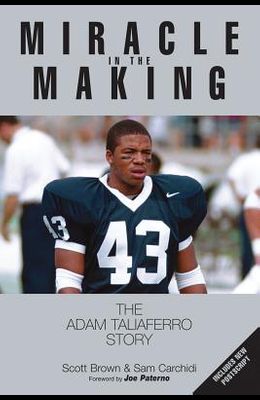 Miracle in the Making: The Adam Taliaferro Story

by
Scott Brown and Sam Carchidi and Joe Paterno

Adam Taliaferro had it all: smarts, an easy-going personality, and incomparable athletic ability. None of that seemed to matter, however, on that fateful September day when his father was given startling news: Do not expect your son to walk. Ever.Since that numbing day, Taliaferro, the Penn State freshman cornerback who was paralyzed after he tackled an Ohio State running back, has defied the odds. Before he had spinal-fusion surgery, he made a vow to his mother: Mom, I'm not going out like this. Three months later, he walked out of a Philadelphia hospital on crutches, determined to complete his amazing recovery, making the name Adam Taliaferro synonymous with courage and perseverance.