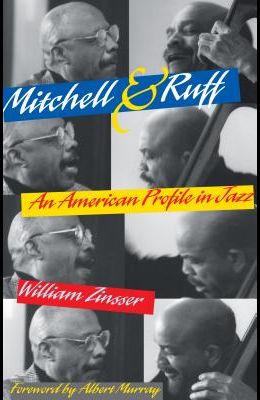 Highly recommended-- Library Journal In this account of the world adventures of two splendid jazz artists, Bill Zinsser has given us one of the most exciting books about America's original art form that I've ever read. It's a revelation.--Studs Terkel Since 1955, Dwike Mitchell and Willie Ruff have been playing, teaching, and sharing jazz around the U.S. and around the world. William Zinsser, one of our finest chroniclers of American life, tells their story as he travels with the duo to China, to Davenport, Iowa, to New York City, and--with Willie Ruff--to St. Mark's Basilica in Venice, where Ruff journeys back to the roots of Western music in order to understand jazz's musical legacy. Zinsser also accompanies Mitchell and Ruff as they visit their hometowns in Florida and Alabama. We listen as the two men tell of growing up in small towns in the American South of the 1930s and 40s; as they tell about the teachers, community leaders, and family members who believed in two young black men with talent but no formal musical training; as they tell of their struggles, their perseverance, and their ultimate success. Jazz is indeed a uniquely American musical tradition, and there are no better guides to this inspiring art than Dwike Mitchell and Willie Ruff. This is a] thoughtful, adept, and satisfyingly unusual book of reportage...Though its contents are entirely factual, it concerns lives that give the sense of being but fatefully, imaginatively, arranged, and it constantly suggests improvisation--that is, 'something created during the process of delivery, ' as Mr. Ruff explains the term to the Chinese...He also tells them improvisation is 'the lifeblood of jazz.' William Zinsser's book reminds us that improvisation is the lifeblood of life, too. This book is also] about difficult passages that end in victorious arrival. Mitchell & Ruff is a deservedly happy book.-- New York Times Book Review A highly infectious, Studs Terkel-like chronicle about the unorthodox development of two distinguished musicians.-- Publishers Weekly Jazz came to China for the first time on the afternoon of June 2, 1981, when the American bassist and French-horn player Willie Ruff introduced himself and his partner, the pianist Dwike Mitchell, to several hundred students and professors who were crowded into a large room at the Shanghai Conservatory of Music. Probably they were not surprised to find that the two musicians were black...What they undoubtedly didn't expect was that Ruff would talk to them in Chinese.--from Chapter 1, Shanghai William Zinsser is a lifelong journalist and nonfiction writer--he began his career on the New York Herald Tribune in 1946--and is also a teacher, best known for his book On Writing Well , a companion held in affection by three generations of writers, reporters, editors, teachers, and students. His 17 other books range from memoir ( Writing Places ) to travel ( American Places ), jazz ( Mitchell & Ruff ), American popular song ( Easy to Remember ), baseball ( Spring Training ) and the craft of writing ( Writing to Learn ). During the 1970s he was at Yale University, where he was master of Branford College and taught the influential nonfiction workshop that would start many writers and editors on their careers. He has taught at the New School, in New York, his hometown, and at the Columbia University Graduate School of Journalism. Albert Murray is a cultural critic, biographer, essayist, and novelist. He has taught at several colleges, including Colgate, Barnard, and Tuskegee. Mr. Murray's works include The Omni-Americans, South to a Very Old Place, Train Whistle Guitar, The Blue Devils of Nada , and The Seven League Boots.