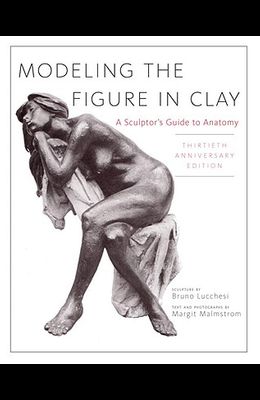 Modeling the Figure in Clay, 30th Anniversary Edition: A Sculptor's Guide to Anatomy

For thirty years, Modeling the Figure in Clay has been an indispensable anatomical resource for people who think, see, and understand form best in the round: sculptors. In the thirtieth anniversary edition of this classic work, master sculptor Bruno Lucchesi invites you on a guided tour of the human form. Follow him as he creates a figure in clay--literally from the inside out--starting with the skeleton, laying on the muscles to show male and female anatomy, and finishing with a complete figure sculpture with every detail of face and hair carefully modeled. BRUNO LUCCHESI's work has been added to the collections of the Whitney Museum of American Art, the Brooklyn Museum, and the Dallas Museum, among many others. Lucchesi has received awards from the National Academy, the National Arts Club, and the Architectural League. He was a Guggenheim Fellow in 1962-1963, he won a Gold Medal award from the National Academy of Design in 1990, and was awarded the Polich Tallix Foundry Prize from the National Sculpture Society in 2009.

Books similiar to Modeling the Figure in Clay, 30th Anniversary Edition: A Sculptor's Guide to Anatomy

List of All Editions of Modeling the Figure in Clay, 30th Anniversary Edition: A Sculptor's Guide to Anatomy