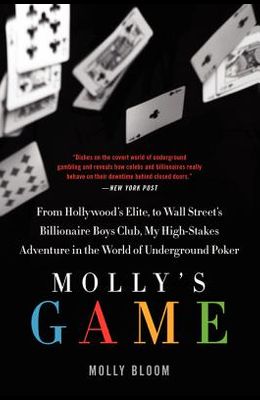 Molly's Game: The True Story of the 26-Year-Old Woman Behind the Most Exclusive, High-Stakes Underground Poker Game in the World

Now a major motion picture, written and directed by Aaron Sorkin and starring Jessica Chastain, Idris Elba, Kevin Costner, and Michael Cera--the true story of Hollywood's poker princess who gambled everything, won big, then lost it all. Molly Bloom reveals how she built one of the most exclusive, high-stakes underground poker games in the world--an insider's story of excess and danger, glamour and greed. In the late 2000s, Molly Bloom, a twentysomething petite brunette from Loveland Colorado, ran the highest stakes, most exclusive poker game Hollywood had ever seen--she was its mistress, its lion tamer, its agent, and its oxygen. Everyone wanted in, few were invited to play. Hundreds of millions of dollars were won and lost at her table. Molly's game became the game for those in the know--celebrities, business moguls, and millionaires. Molly staged her games in palatial suites with beautiful views and exquisite amenities. She flew privately, dined at exclusive restaurants, hobnobbed with the heads of Hollywood studios, was courted by handsome leading men, and was privy to the world's most delicious gossip, until it all came crashing down around her. Molly's Game is a behind the scenes look at Molly's game, the life she created, the life she lost, and what she learned in the process.

From the Back Cover The true story of Hollywood's Poker Princess who gambled everything, won big, then lost it all When Molly Bloom was a little girl in a small Colorado town, she dreamed of a life without rules and limits, a life where she didn't have to measure up to anyone or anything--where she could become whatever she wanted. She ultimately got more than she could have ever bargained for. In Molly's Game , she takes you through her adventures running an exclusive high-stakes private poker game catering to such clients as Hollywood royalty like Leonardo DiCaprio and Ben Affleck, athletes, billionaires, politicians, and financial titans. With rich detail, Molly describes a world of glamour, privilege, and secrecy in which she made millions, lived the high life, and fearlessly took on the Russian and Italian mobs--until she met the one adversary she could not outsmart: the United States government. It's the story of how a determined woman gained--and then lost--her place at the table, and of everything she learned about poker, love, and life in the process.