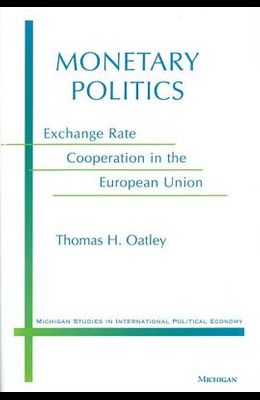 A single currency--and the necessary prior condition of exchange rate cooperation and the stabilization of exchange rates--has been an elusive goal of many European leaders for more than twenty years. While much of the literature on exchange rate cooperation within the European Union focuses on the integration of national economies as the driving force, Thomas Oatley draws on public choice models to develop an explanation of exchange rate cooperation based on domestic politics. The author then tests hypotheses derived from this model in a detailed consideration of the various efforts to stabilize currencies since the 1970s. Oatley argues that monetary policy has distributional effects and is used by policy makers to achieve domestic policy goals. Thus domestic politics plays an important role in defining the approach leaders take to monetary integration. Oatley suggests that leaders supported the creation of the European Monetary System because governments saw a link to the Bundesbank as a useful instrument to help slow the growth of wages, redistribute income from labor to capital, and achieve domestic stabilization. The later collapse of the System reflected the unwillingness on the part of many leaders to continue to follow the Bundesbank's lead as well as the Bundesbank's own reservations about monetary integration. Given the rising strife in countries such as France over the domestic costs of monetary integration, Oatley's domestic politics explanation will be useful in understanding the continued efforts of European policy makers to work towards an integrated currency. This book should appeal to political scientists and economists interested in international cooperation, the European Union and exchange rate systems. Thomas Oatley is Assistant Professor of Political Science, University of North Carolina.

List of All Editions of Monetary Politics: Exchange Rate Cooperation in the European Union