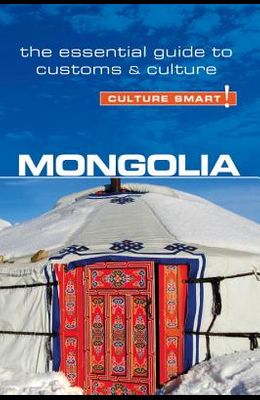 Mongolia is landlocked between its neighbors China and Russia in the heart of Asia. For centuries after the disintegration of Genghis Khan s empire it was ruled by one or the other, but in 1990 the Mongols embraced democracy. Now, after two centuries of Manchu stagnation and seventy years of Soviet communism, they are rebuilding their national heritage. Rarely in the news but making progress toward a market economy, this resource-rich but infrastructure-poor country is a land of pioneers, and its greatest asset is the Mongol people, who are friendly, cooperative, ambitious, and well educated. English is now the first foreign language and the country s leaders are forging new partnerships with international investors. Travelers from across the world are drawn to the land of blue sky by its picturesque mountains and lakes, flower-carpeted steppes and stony deserts, home to the snow leopard, the wild horse and camel, and the Gobi bear. The broad pasturelands, with herds of grazing livestock, and the traditional lifestyle of the nomads contrast with the busy streets of the capital Ulan Bator, a bustling metropolis of over one million people, modern hotels, apartments, and shops, interspersed with Buddhist monasteries and temples, surrounded by crowded suburbs of traditional felt tents. Mongolia s many attractions range from dinosaur skeletons and the remains of ancient civilizations to relics and reenactments of the Genghis Khan era, and the traditional sports of wrestling, archery, and horse-racing. Culture Smart Mongolia provides rare insights into contemporary Mongolian society, and offers practical tips on what to expect and how to conduct yourself in order to get the most out of your visit. Despite the undeniable challenges posed by modernity, these warm, tough, adaptable, and hospitable people welcome visitors and are open to the world.

List of All Editions of Mongolia - Culture Smart!, Volume 68: The Essential Guide to Customs & Culture