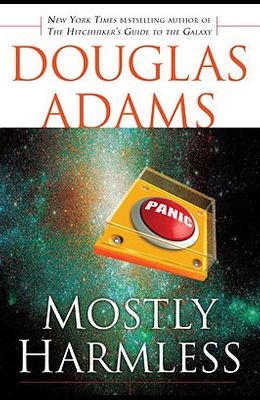 Adams is back with the amazing, unprecedented, logic-defying, but-why-stop-now fifth novel in the Hitchhiker Trilogy. Random, the daughter of Arthur Dent, has grown up on a remote world at the edge of the universe. Now she sets out on a transgalactic quest to find the planet of her ancestors. . . .

From the front Cover It's not just a trilogy any more. In the fifth book of this popular series, Arthur Dent makes the terrible mistake of starting to enjoy life, and immediately all hell breaks loose. In short, it's up to him to save the world from total multi-dimensional obliteration, the Guide from a hostile alien takeover, and the daughter he never knew he had, from herself. A tall order, to say the least. And one he's really not up to, thank you very much. Douglas Adams is a terrific satirist....He is anything but harmless. THE WASHINGTON POST BOOK WORLD