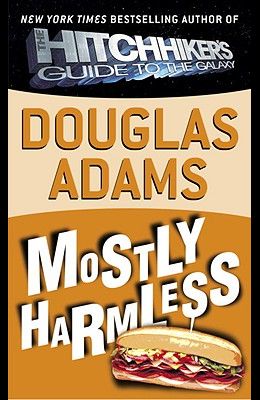 The fifth hilarious novel in the classic Hitchhiker's Guide to the Galaxy series follows the exploits of Arthur Dent, who has to adjust to a new life when his spaceship crashes on a remote planet. If you were hoping for more of the zany, nonsensical, mayhem produced in the earlier books, you're in luck. --The New York Times Book Review.

From the Back Cover It's easy to get disheartened when your planet has been blown up, the woman you love has vanished in a misunderstanding about space/time, the spaceship you are on crashes on a remote and Bob-fearing planet, and all you have to fall back on is a few simple sandwich-making skills. However, instead of being disheartened, Arthur Dent makes the terrible mistake of starting to enjoy life a bit and, immediately, all hell breaks loose. Hell takes a number of forms: there is the usual Ford Prefect form of hell, fresh hell in the form of an all-new version of The Hitchhiker's Guide to the Galaxy, and a totally unexpected hell in the form of a teenage girl who startles Arthur Dent by being his daughter when he didn't even know he had one. Can Arthur save the Earth from total multidimensional obliteration? Can he save the Guide from a hostile alien takeover? Can he save his daughter, Random, from herself? Of course not. He never works out what is going on, exactly. Will you?
From the front Cover Douglas Adams is back with the amazing, logic-defying, but-why-stop-now fifth novel in the Hitchhiker Trilogy. Here is the epic story of Random, who sets out on a transgalactic quest to find the planet of her ancestors. Line drawings. From the Hardcover edition.