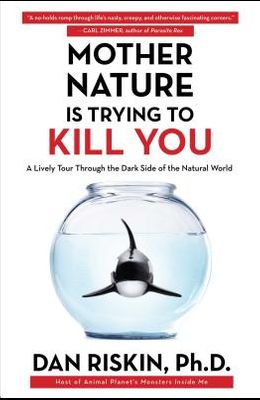 Mother Nature Is Trying to Kill You: A Lively Tour Through the Dark Side of the Natural World

This fact-filled and amusing trek through nature's dark side ( Kirkus Reviews ) reveals the fascinating, weird, and often perverted ways that Mother Nature fends only for herself. It may be a wonderful world, but as Dan Riskin (host of the Animal Planet's TV show Monsters Inside Me ) explains, it's also a dangerous, disturbing, and disgusting one. At every turn, it seems, living things are trying to eat us, poison us, use our bodies as their homes, or have us spread their eggs. In Mother Nature Is Trying to Kill You, Riskin is our tour guide through the natural world at its most gloriously ruthless. Using the seven deadly sins as a road map, Riskin offers dozens of jaw-dropping examples that illuminate how brutal nature can truly be. From slothful worms that hide in your body for up to thirty years to wrathful snails with poisonous harpoons that can kill you in less than five minutes to lustful ducks that have orgasms faster than you can blink, these fascinating accounts reveal the candid truth about gentle Mother Nature's true colors. Riskin's passion for the strange and his enthusiastic expertise bring Earth's most fascinating fauna and flora into vivid focus. Through his adventures--which include sliding on his back through a thick soup of bat guano just to get face-to-face with a vampire bat, befriending a parasitic maggot that has taken root in his head, and coming to grips with having offspring of his own--Riskin makes unexpected discoveries not just about the world all around us but also about the ways this brutal world has shaped us as humans and what our responsibilities are to this terrible, wonderful planet we call home.