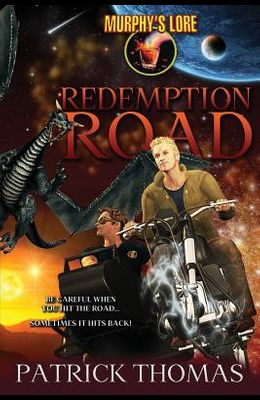 Follow the rainbow to its end & you will discover a place where magic is as real as hope & legends dwell. For the troubled, it is a place to find those who will help them in beating back the darkness. For those lucky enough to find it, their lives will never again be the same. The name of the place is Bulfinche's Pub. These are their stories. This is Murphy's Lore. After centuries of imprisonment and torture, the Norse trickster Loki is freed for a day in payment for a good deed done years past. The god of deception promises to return but manages to find a way to turn that day into weeks. The only catch is he has to bring bartender John Murphy along for the ride, literally. While visiting distant worlds they are drawn into a war, fighting for those who cannot defend themselves. They are joined by goblins, trolls and a fugitive thunderer. In the midst of the struggle, Loki arrives at a crossroad. One way lies personal freedom, but at a terrible cost to the people he is trying to save. The other path may well destroy him, but could stop Ragnarok. Can someone considered evil truly change? Will Loki continue on the path to destruction or take his first steps on REDEMPTION ROAD. PARTICIPANTS OF THE KARMA WAR speak out on REDEMPTION ROAD: A dazzling display of story telling skill. If this book isn't on your bookshelves, your personal library is incomplete. -Murphy's Mom A great book. Delicious as an appetizer or entree. Even better with a little salt.-Pace, Primitive Troll War is hell. I should know. I've fought in a hundred campaigns on dozens of worlds. So in a choice between war and Murphy's book, I recommend the book. However I don't recommend using it as a weapon unless you're fighting tiny insects. -Tock, Goblin Commander I can't guarantee this book will protect you against lightning strikes, but I can honestly said that I've never known anyone who owned this book that was struck by a thunderbolt. And I've seen plenty of people struck by lightning, usually right after they tick me off. -Thunder Jack, The god formerly known as Zeus Praise for the Murphy's Lore series: HUMOR, OUTRAGEOUS ADVENTURES, & SOME CLEVER PLOT TWISTS. -Don D'Ammassa, SCIENCE FICTION CHRONICLE SLICK... ENTERTAINING. -Paul Di Filippo, ASIMOV'S JOIN HEX, PADDY & THE GANG IN THEIR RACE TO UNDO THE FUTURE IN PATRICK THOMAS'S FOOLS' DAY, PART OF HIS COMIC MURPHY'S LORE SERIES. -PUBLISHER'S WEEKLY The cast of characters at Bulfinche's Pub is always changing, bringing new laughs, perils, & adventure. Don't miss the latest installment of this wonderful series. -Edward McFadden, FANTASTIC STORIES WANT TO LEAVE YOUR LIFE BEHIND? THEN FOLLOW ME TO BULFINCHE'S PUB... THE CLIENTELE WILL NEVER CEASE TO AMAZE YOU. -Michael Laimo, PIRATE WRITINGS HERE MAGIC IS THE NORM... MURPHY'S LORE OFFERS THE READER A LOOK AT THE WORLD BEYOND. -Alan Zimmerman, THE NEW YORK PRESS AMUSING STUFF. WONDERFUL STUFF. -Andrew Andrews, TRUE REVIEW A DELICIOUS COCKTAIL OF HUMOR, FANTASY & HEART WITH A DASH OF SUSPENSE THAT YOU WON'T BE ABLE TO PUT DOWN.-Beth Hannan Rimmels, THE LONG ISLAND VOICE I WAS THOROUGHLY ENCHANTED...AN OFF THE SCALE BOOK. BUZZ BOOK REVIEW PATRICK THOMAS CONTINUES TO AMAZE ME WITH THE MURPHY'S LORE SERIES. JUST WHEN I THOUGHT HE COULD NOT TOP HIMSELF, HE PROVED ME WRONG AND CREATED ANOTHER EQUALLY ENTHRALLING BLOCKBUSTER. -Jon Minners, BANDWIDTH

List of All Editions of Murphy's Lore: Redemption Road