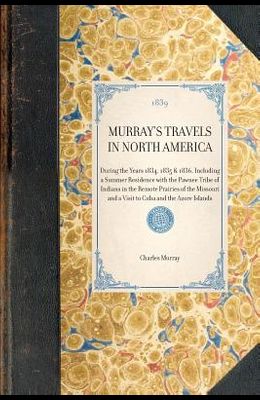 Murray's Travels in North America: During the Years 1834, 1835 & 1836, Including a Summer Residence with the Pawnee Tribe of Indians in the Remote Pra

Charles Augustus Murray, a British diplomat, traveled through the United States, focusing on the Midwest and South. In his 1839 account of his travels, Murray describes at great length his months living with the Pawnee, a Native American tribe that historically lived along the Platte, Loup and Republican Rivers in present-day Nebraska. The British were very interested in the West of the United States, given their relations with the native tribes during the War of 1812, relations that continued to be a cause of tension with settlers, and their continued governance of Canada. Murray was one of a number of British citizens who travelled the American West in the mid-nineteenth century. While Mark Twain noted with appreciation Murray's descriptions of the Mississippi River in his own Life on the Mississippi, this work is more notable for its lengthy descriptions of the life and customs of the Pawnee, an often misunderstood tribe who were depicted as the enemy tribe against the Lakota Sioux in Kevin Costner's 1990 film Dances with Wolves.

List of All Editions of Murray's Travels in North America: During the Years 1834, 1835 & 1836, Including a Summer Residence with the Pawnee Tribe of Indians in the Remote Pra