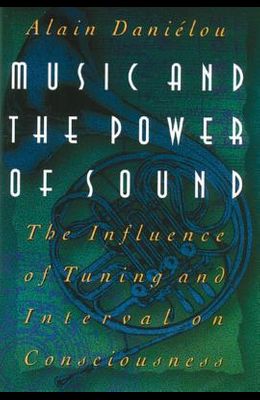 Music and the Power of Sound: The Influence of Tuning and Interval on Consciousness

Music has always been esteemed for its power to speak directly to our higher consciousness, a power founded in the purity of simple harmonic ratios. In this book, Alain Danielou traces the development of musical scales and tuning from their origins in both China and India, through their merging in ancient Greece, and on to the development of the Western traditions of modal and polyphonic music. Understanding these potent harmonic relationships offers a way for today's musicians to transcend the limitations of overly rationalistic music by drawing on its metaphysical roots.

From the Back Cover With his fierce, global intelligence, Alain Danielou was the first to wake up the West to the universality of musical harmony and its potential for planetary consciousness. --W.A. Mathieu, author of The Listening Book and The Musical Life Alain Danielou was a man whose vast and curious learning in the fields of literature, music and the Orient was unequalled in our time. --James Kirkup, The Independent He is one of the greatest western authorities on Hinduism. A man whose passionate involvement with India shaped his writing over several decades. . . . Danielou's talents seem unending. --Mohini Kent, Times of India Our debt to his scholarship and humanity is immeasurable. --The Times Literary Supplement
From the front Cover MUSIC Music, above all other arts, has always been esteemed for its power to speak directly to our higher consciousness. Based on unchanging laws of number and proportion, music also embodies the fundamental metaphysical principles underlying everyday reality. How do these two aspects of music's power, it's twin roots in consciousness and mathematics, relate to one another? And why does each of the world's music systems seem to have its own unique effects on consciousness? Music and the Power of Sound is a new and thoroughly revised edition of Alain Danielou's pioneering Introduction to the Study of Musical Scales, an important book that for many years has been virtually unobtainable in the West. In these pages, Danielou traces the development of musical scales from their origins in both China and India, through the merging in ancient Greece of those two systems, and on to the development of the Western musical traditions of modal and polyphonic music. Because musical pitches have specific frequencies, their relationships can be expressed numerically as ratios of greater or lesser complexity: the simpler the ratio, the more euphonious the harmony. The musicians of antiquity understood scales to be either cycles of simple intervals (China), arrays of varying intervals around a central pitch (India), or a combination of the two (Greece). Any one of these methods of construction resulted in a multitude of contrasting scales, each capable of expressing distinct emotional and spiritual states. Those scales, Danielou argues, not only reflected but also influenced the spiritual values of their parent civilizations. In the purity of simple harmonic ratios can be found the secrets of music's affective power. These potent harmonic relationships offer a way for today's musicians to transcend the limitations of our overly rationalistic musical system and fashion a synthesis with the metaphysical roots of the most eternal of arts. ALAIN DANIeLOU (1907-1994), the founder of the International Institute of Comparative Musicology in Berlin, elucidated for tens of thousands of readers the meanings of the arts and religious traditions of both East and West. He was an accomplished player of the v&#297;na and taught in the music department at the University of Benares. His numerous books, the product of a career spanning six decades, include: The Myths and Gods of India; Gods of Love and Ecstasy; While the Gods Play; Virtue, Success, Pleasure, and Liberation; The Phallus; Yoga: Mastering the Secrets of Matter and the Universe; and The Complete Kama S&#7919;tra.

Frequently Asked Questions About Music and the Power of Sound: The Influence of Tuning and Interval on Consciousness

Books like Music and the Power of Sound: The Influence of Tuning and Interval on Consciousness

0
|   0  reviews
Did you read Music and the Power of Sound: The Influence of Tuning and Interval on Consciousness? Please provide your feedback and rating to help other readers.
Write Review

List of All Editions of Music and the Power of Sound: The Influence of Tuning and Interval on Consciousness