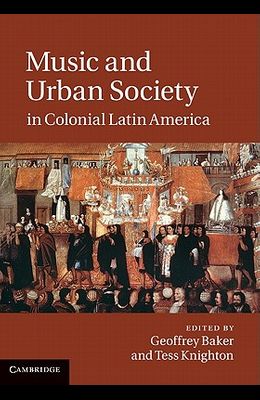 by
and Geoffrey Baker and Tess Knighton

The Spanish colonial project in Latin America from the sixteenth to the eighteenth centuries was distinctly urban in focus. The impact of the written word on this process was explored in ngel Rama's seminal book The Lettered City, and much has been written by historians of art and architecture on its visible manifestations, yet the articulation of sound, urban geography and colonial power - 'the resounding city' - has been passed over in virtual silence. This collection of essays by leading scholars examines the role of music in Spanish colonial urbanism in the New World and explores the urban soundscape and music profession as spheres of social contact, conflict, and negotiation. The contributors demonstrate the role of music as a vital constituent part of the colonial city, as Rama did for writing, and therefore illustrate how musicology may illuminate and take its place in the broader field of Latin American urban history.