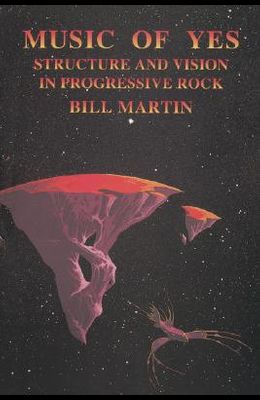 Music of Yes: Structure and Vision in Progressive Rock

Music of Yes examines the work of one of the most creative groups from the progressive rock period, Yes. Unlike most books on rock music, Music of Yes does not focus on personalities, but instead on musical structures, lyrical vision, and cultural and historical context. The author situates Yes within the utopian ideals of the sixties and the experimental trend in rock music initiated by the Beatles and also taken up by groups such as King Crimson. Martin demonstrates the power of Yes's romantic, utopian, Blakean, ecological, multicultural, and feminist perspective, showing how this vision is developed through

From the Back Cover Yes is one of the most creative groups from the progressive rock period. In the early 1970s, Yes evolved into a visionary, virtuoso band, producing a series of adventurous, controversial, and difficult works. In this pathbreaking book, wholly devoted to the serious discussion of a rock group's oeuvre, Bill Martin follows the trajectory of Yes from the group's formation in 1968 to the present, with a special focus on what Martin calls Yes's main sequence - from The Yes Album (1971) to Going for the One (1977). Professor Martin situates Yes within the utopian ideals of the 1960s and the experimental trend initiated by The Beatles, then developed by such groups as King Crimson, Jethro Tull, Pink Floyd, and Emerson, Lake, and Palmer. Although sometimes critical of Yes's work, Martin defends Yes against their supposed blissed-out over-optimism and their departures from blues orthodoxy. Drawing upon the thinking of Adorno and Marcuse, Martin demonstrates the power of Yes's Romantic, utopian, Blakean, ecological, multicultural, and feminist perspectives, showing how the vision which unifies these is developed though extended and sophisticated musical creations.

Books similiar to Music of Yes: Structure and Vision in Progressive Rock

List of All Editions of Music of Yes: Structure and Vision in Progressive Rock