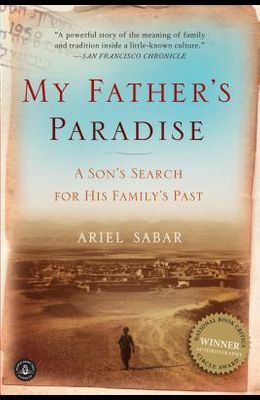 My Father's Paradise: A Son's Search for His Family's Past

Sabar once looked at his [immigrant] father with shame, scornful of the alien who still bore scars on his back from childhood bloodlettings. This book, he writes, is a chance to make amends.--New York Times Sunday Book Review.

From the front Cover I am the keeper of my family s stories. I am the guardian of its honor. I am the defender of its traditions. As the first-born son of a Kurdish father, these, they tell me, are my duties. And yet even before my birth I resisted. So begins Ariel Sabar's true tale of a father and a son, and the two worlds that kept them apart and finally brought them together: ancient Iraq and modern America. In a remote corner of the world, forgotten for nearly three thousand years, lived an enclave of Kurdish Jews so isolated that they still spoke Aramaic, the language of Jesus. Mostly illiterate, they were self-made mystics and gifted storytellers, humble peddlers and rugged loggers who dwelt in harmony with their Muslim and Christian neighbors in the mountains of northern Iraq. To these descendants of the Lost Tribes of Israel, Yona Sabar was born. Caught unawares by growing ethnic tensions in the Middle East after World War II, the Jews of Zakho were airlifted to the new state of Israel in the 1950s with the mass exodus of 120,000 Jews from Iraq one of the world s largest and least-known diasporas. Almost overnight, the Kurdish Jews exotic culture and language were doomed to extinction. Yona s son Ariel knew little of his father s history. Growing up in Los Angeles, where Yona had become an esteemed professor at UCLA and had dedicated his career to preserving his people s traditions, Ariel wanted nothing to do with his father s strange immigrant heritage. Until he had a son of his own. My Father s Paradise is Ariel Sabar's quest to reconcile present and past. As Ariel and his father travel together into today's postwar Iraq to find what s left of Yona's birthplace, Sabar brings to life the ancient town of Zakho, telling his family s story and discovering their place in the sweeping saga of the Sephardic Jews' millennia-long survival in Islamic lands. He introduces us to his spiritual great-grandfather, the village cloth dyer by day