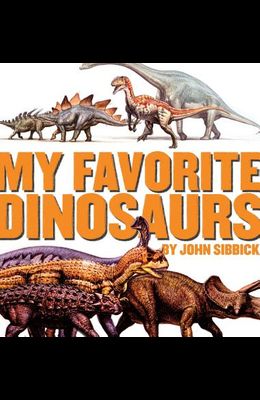 by
Ruth Ashby and John Sibbick

MY FAVORITE DINOSAURS presents a child's world of all the classic dinosaurs from Tyrannosaurus Rex to Hadrosaurs along with dramatic new finds in John Sibbick's world-famous style. Simple text and design make the ideal 'first' dinosaur book for readers ages 4-8. Everyone has a favorite dinosaur What's yours? Are you a fan of the sharp-toothed, meat-eating predators? If so, your favorite may be Tyrannosaurus rex. Or the sickle-clawed Deinonychus. Or T. rex's nasty cousin, Tarbosaurus. Or the horned killer Ceratosaurus. Perhaps you prefer the plant-eating giants. If so, your favorite dinosaur may be the massive Apatosaurus (formerly called Brontosaurus). Or the tallest dinosaur, Brachiosaurus. If your favorites are the armored dinosaurs, you'll find plenty of them here, too, like Polacanthus, often called a walking tank. Or you may like Stegosaurus and its kin. Or you may prefer the duckbilled dinosaurs, like Parasaurolophus, Lambeosaurus, and Corythosaurus. Strange-looking dinosaurs, plant-eaters that walked on two legs as well as all four, dinosaurs that had snouts like crocodiles, meat-eating dinosaurs in all sizes and shapes, dinosaurs that looked like birds, dinosaurs that were birds . . . all are here for your viewing pleasure. Learn about dinosaurs you never heard of before. Discover old friends and find new favorites. JOHN SIBBICK debuted with a dramatic splash in 1985 as the illustrator of two landmark books on dinosaur paleontology: When Dinosaurs Ruled the Earth, by David Norman, and The Illustrated Encyclopedia of Dinosaurs, also by David Norman. His exquisitely researched and executed paintings have graced the pages of over a dozen books on paleo-life for both adults and children. He has also illustrated a half-dozen major features on paleo-life for National Geographic magazine, covering such subjects as Mass Extinctions, Gobi Desert Dinosaurs, Homo Erectus, and Pterosaurs. Sibbick's paintings have been exhibited in museums and galleries throughout the United Kingdom, Japan, and the United States. His work has also been included in traveling exhibitions mounted both here and in Europe, including Dinosaurs, A Global View, Tracking Dinosaurs, and Dinosaurs: Then and Now. Sibbick lives and works in England, where he is generally acknowledged as the dean of paleo-art. RUTH ASHBY has written many award-winning biographies and nonfiction books for children, including Herstory, The Elizabethan Age, and Pteranodon: The Life Story of a Pterosaur. She lives in Long Island with her husband, daughter, and dog, Nubby.