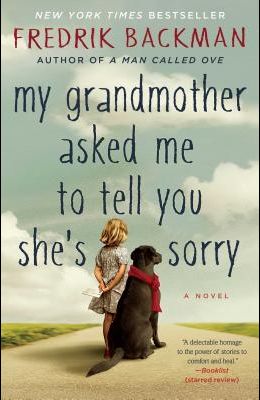 My Grandmother Asked Me to Tell You She's Sorry

The #1 internationally bestselling author of A Man Called Ove is firmly in league with Roald Dahl and Neil Gaiman (Kirkus Reviews) in this whimsical (Publishers Weekly) novel about a young girl whose grandmother leaves behind a series of letters, sending her on a journey that brings to life a world of homespun fairy tales. Elsa is seven years old and different. Her grandmother is seventy-seven years old and crazy as in standing-on-the-balcony-firing-paintball-guns-at-strangers crazy. She is also Elsa s best, and only, friend. At night Elsa takes refuge in her grandmother s stories, in the Land-of-Almost-Awake and the Kingdom of Miamas where everybody is different and nobody needs to be normal. When Elsa s grandmother dies and leaves behind a series of letters apologizing to people she has wronged, Elsa s greatest adventure begins. Her grandmother s instructions lead her to an apartment building full of drunks, monsters, attack dogs, and old crones but also to the truth about fairy tales and kingdoms and a grandmother like no other. My Grandmother Asked Me to Tell You She s Sorry is told with the same comic accuracy and beating heart as Fredrik Backman s internationally bestselling debut novel, A Man Called Ove. It is a story about life and death and one of the most important human rights: the right to be different.