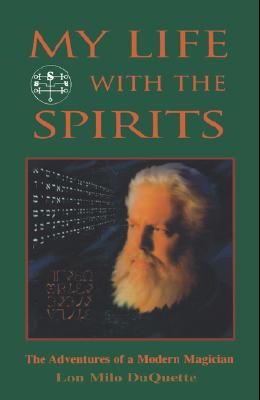 My Life with the Spirits: The Adventures of a Modern Magician

Full of self-effacing confessions and breathtaking profundities, this title is a glimpse into the fascinating, sometimes terrifying, sometimes hilarious world of a modern ceremonial magician.

From the Back Cover Not since The Confessions of Aleister Crowley has a true magician told his own story. My Life with the Spirits is a rare glimpse into the fascinating, sometimes terrifying, sometimes hilarious world of a modern ceremonial magician. Hailed by critics as the most entertaining author in the field and one of the most widely respected members of the magick community, Lon Milo DuQuette gently draws you into the introspective world of the modern magician, tickles you with hilarious observations and self-effacing confessions, then (often in the same paragraph) slams you in the heart with breathtaking profundities. DuQuette's most impressive quality is that in spite of his many accomplishments he doesn't take himself too seriously, which makes what he has to say all the more appealing. He's been through experiences that many Americans can relate to from his agonizing years of Sunday School and service as an altar boy, to riding the waves of the cultural revolution of the 60s. After sorting through an abundance of spiritual paths, he finally came upon one that resonated with him. By shedding light on his own development -- as a person and a magician -- DuQuette provides a beacon for aspiring magicians everywhere.