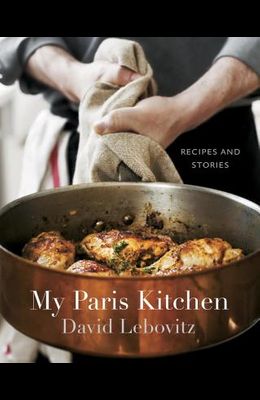 My Paris Kitchen: Recipes and Stories

A collection of stories and 100 sweet and savory French-inspired recipes from popular food blogger David Lebovitz, reflecting the way Parisians eat today and featuring lush photography taken around Paris and in David's Parisian kitchen. In 2004, David Lebovitz packed up his most treasured cookbooks, a well-worn cast-iron skillet, and his laptop and moved to Paris. In that time, the culinary culture of France has shifted as a new generation of chefs and home cooks--most notably in Paris--incorporates ingredients and techniques from around the world into traditional French dishes. In My Paris Kitchen , David remasters the classics, introduces lesser-known fare, and presents 100 sweet and savory recipes that reflect the way modern Parisians eat today. You'll find Soupe l'oignon, Cassoulet, Coq au vin, and Croque-monsieur, as well as Smoky barbecue-style pork, Lamb shank tagine, Dukkah-roasted cauliflower, Salt cod fritters with tartar sauce, and Wheat berry salad with radicchio, root vegetables, and pomegranate. And of course, there's dessert: Warm chocolate cake with salted butter caramel sauce, Duck fat cookies, Bay leaf poundcake with orange glaze, French cheesecake...and the list goes on. David also shares stories told with his trademark wit and humor, and lush photography taken on location around Paris and in David's kitchen reveals the quirks, trials, beauty, and joys of life in the culinary capital of the world.

Books similiar to My Paris Kitchen: Recipes and Stories

List of All Editions of My Paris Kitchen: Recipes and Stories