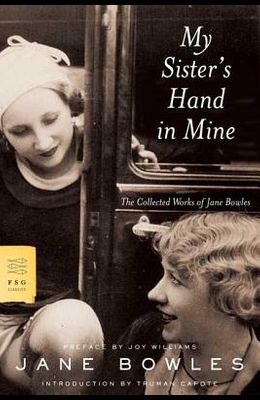 My Sister's Hand in Mine: The Collected Works of Jane Bowles

Though she wrote only one novella, one short play, and fewer than a dozen short stories over a roughly twenty-year span from the early 1940s to the mid-1960s, Jane Bowles has long been regarded by critics as one of the premier stylists of her generation. Enlivened at unexpected moments by sexual exploration, mysticism, and flashes of wit alternately dry and hilarious, her prose is spare and honed, her stories filled with subtly sly characterizations of men and, mostly, women, dissatisfied not so much with the downward spiral of their fortunes as with the hollowness of their neat little lives. Whether focused on the separate emergences of Miss Goering and Mrs. Copperfield from their affluent, airless lives in New York and Panama into a less defined but intense sexual and social maelstrom in the novella Two Serious Ladies , or on the doomed efforts of the neighbors Mr. Drake and Mrs. Perry to form a connection out of their very different loneliness in Plain Pleasures, or on the bittersweet cultural collision of an American wife and a peasant woman in Morocco in Everything Is Nice, Jane Bowles creates whole worlds out of the unexpressed longings of individuals, adrift in their own lives, whether residing in their childhood homes or in faraway lands that are somehow both stranger and more familiar than what they left behind.

List of All Editions of My Sister's Hand in Mine: The Collected Works of Jane Bowles