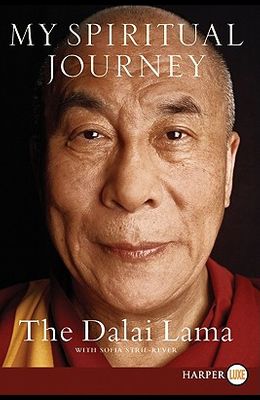 by
Dalai Lama and Sofia StrilRever

In this elegant self-portrait, the world's most outspoken and influential spiritual leader recounts his epic and engaging life story. The Dalai Lama's most accessible and intimate book, My Spiritual Journey is an excellent introduction to the larger-than-life leader of Tibetan Buddhism--perfect for anyone curious about Eastern religion, invested in the Free Tibet movement, or simply seeking a richer spiritual life. The Dalai Lama's riveting, deeply insightful meditations on life will resonate strongly with readers of Pema Chodron, Thich Nhat Hanh, or the His Holiness's own The Art of Happiness and Ethics for the New Millennium.

From the Back Cover In His Own Words The Compelling Personal Story of the Spiritual Life of the Dalai Lama The world knows the public face of the Fourteenth Dalai Lama. We have read about his near escape from Tibet after the Chinese invasion, his Nobel Peace Prize, and his friendships with world leaders, Hollywood actors, and scientists around the world. But what are his inner, personal thoughts on his own spiritual life? For the first time and in his own words, the Dalai Lama charts his spiritual journey from his boyhood days in rural Tibet to his years as a monk in the capital city of Dharamsala, to his life in exile as a world leader and symbol of peace.