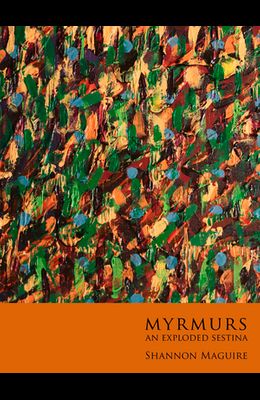 Poetry. Drawings by David Bateman. How are self-regulating systems such as cities, languages, and ant colonies alike or unalike? What does a medieval love poem have to do with neocolonialism? What politics does interspecies desire entail? How can we escape the trappings of enlightenment and make meaning otherwise? MYRMURS: AN EXPLODED SESTINA explores the connection between medieval texts and textuality, contemporary poetics and politics. In this book, acclaimed Canadian poet Shannon Maguire uses the form of the sestina, a medieval love-poem that follows a set pattern based around six end-words, as a starting point to explore living systems: cities and languages as self- organizing entities; ants; post-human entanglements and attachments; neocolonialism and how to break free of it. Following on her critically acclaimed, FUR(L) PARACHUTE (published by BookThug in 2013), this second collection in Maguire's planned medievalist trilogy develops a new type of poetic form the exploded sestina, borrowing the sestina's pattern of repetition and obsession with the number six, but transforming it into a 39-part network of poems. Beside and around the text are notes or illuminations that hint at some of the ways Maguire thinks about self-organization and political and amorous attachments.