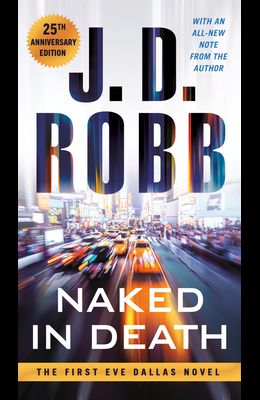 Book #1 in the In Death Series
by
J D Robb

THE 25th ANNIVERSARY EDITION OF THE FIRST NOVEL IN J. D. ROBB'S #1 NEW YORK TIMES BESTSELLING IN DEATH SERIES--INCLUDES A NEW NOTE FROM THE AUTHOR In the year 2058, technology completely rules the world. But for New York City Detective Eve Dallas, one irresistible impulse still rules the heart: passion... Eve Dallas is a New York police lieutenant hunting for a ruthless killer. In over ten years on the force, she's seen it all--and knows her survival depends on her instincts. And she's going against every warning telling her not to get involved with Roarke, an Irish billionaire--and a suspect in Eve's murder investigation. But passion and seduction have rules of their own, and it's up to Eve to take a chance in the arms of a man she knows nothing about--except the addictive hunger of needing his touch.