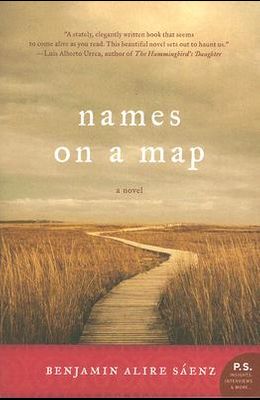 Names on a Map

A book of great lyrical power, Names on a Map is a heartbreaking mirror for our own time, about an American family torn apart by an unjust war. In Ben Saenz' dexterous, tender hands, this novel is a salve upon the wounds of both then and now. --Ruben Martinez, award winning author of Crossing Over: A Mexican Family on the Migrant Trail A haunting novel from award-winning author and poet Benjamin Alire Saenz, about a family of Hispanic immigrants handling the psychological effects of a war they don't feel is theirs to fight In 1967, at the height of the Vietnam War, the Espejo family of El Paso, Texas, is just like thousands of other American families coping with a war they feel does not concern them. When Gustavo, the eldest son--the bad boy of the family--is told to report for basic training, his ideology and sense of patriotism is put to the test. Opting to flee to Mexico and avoid the draft, Gustavo soon realizes he is no more culturally connected to his ancestral homeland than he is to the America that called him to war. Poignant and insightful, Names on a Map explores with complex detail the harsh nature of immigrant life in the United States--and the emotional tug-of-war experienced by all those with allegiance to more than one country.

From the Back Cover The Espejo family of El Paso, Texas, is like so many others in America in 1967, trying to make sense of a rapidly escalating war they feel does not concern them. But when the eldest son, Gustavo, a complex and errant rebel, receives a certified letter ordering him to report to basic training, he chooses to flee instead to Mexico. Retreating back to the land of his grandfather--a foreign country to which he is no longer culturally connected--Gustavo sets into motion a series of events that will have catastrophic consequences on the fragile bonds holding the family together. Told with raw power and searing bluntness, and filled with important themes as immediate as today's headlines, Names on a Map is arguably the most important work to date of a major American literary artist.

Books similiar to Names on a Map

List of All Editions of Names on a Map