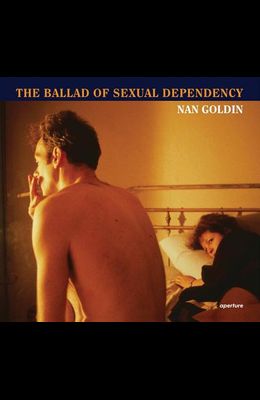 by
Nan Goldin and Mark Holborn

First published in 1986, Nan Goldin's The Ballad of Sexual Dependency is a visual diary chronicling the struggles for intimacy and understanding among the friends and lovers whom Goldin describes as her tribe. These photographs described a lifestyle that was visceral, charged and seething with a raw appetite for living, and the book soon became the swan song for an era that reached its peak in the early 1980s. Twenty-five years later, Goldin's lush color photography and candid style still demand that the viewer encounter their profound intensity head-on. As she writes: Real memory, which these pictures trigger, is an invocation of the color, smell, sound and physical presence, the density and flavor of life. Through an accurate and detailed record of Goldin's life, The Ballad of Sexual Dependency records a personal odyssey as well as a more universal understanding of the different languages men and women speak. The book's influence on photography and other aesthetic realms has continued to grow, making it a classic of contemporary photography. This anniversary edition features all-new image separations produced using state-of-the-art technologies and specially prepared reproduction files, which offer a lush, immersive experience of this touchstone monograph. Nan Goldin was born in Washington, D.C., in 1953, and grew up in Lexington, Massachusetts. Her first solo show was held in Boston in 1973. She moved to New York in 1979, where she began documenting the city's gay and transvestite scenes and developed the informal snapshot aesthetic for which she is celebrated today. Goldin was the 2007 recipient of the Hasselblad Award.