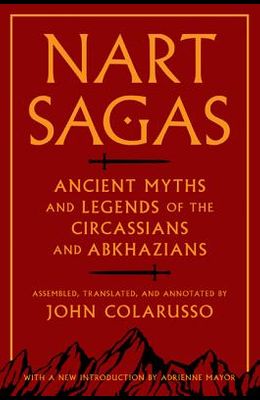 Nart Sagas: Ancient Myths and Legends of the Circassians and Abkhazians

by
John Colarusso and Adrienne Mayor

The sagas of the ancient Narts are to the Caucasus what Greek mythology is to Western civilization. This book presents, for the first time in the West, a wide selection of these fascinating myths preserved among four related peoples whose ancient cultures today survive by a thread. In ninety-two straightforward tales populated by extraordinary characters and exploits, by giants who humble haughty Narts, by horses and sorceresses, Nart Sagas from the Caucasus brings these cultures to life in a powerful epos. In these colorful tales, women, not least the beautiful temptress Satanaya, the mother of all Narts, are not only fertility figures but also pillars of authority and wisdom. In one variation on a recurring theme, a shepherd, overcome with passion on observing Satanaya bathing alone, shoots a bolt of lust that strikes a rock--a rock that gives birth to the Achilles-like Sawseruquo, or Sosruquo. With steely skin but tender knees, Sawseruquo is a man the Narts come to love and hate. Despite a tragic history, the Circassians, Abazas, Abkhaz, and Ubykhs have retained the Nart sagas as a living tradition. The memory of their elaborate warrior culture, so richly expressed by these tales, helped them resist Tsarist imperialism in the nineteenth century, Stalinist suppression in the twentieth, and has bolstered their ongoing cultural journey into the post-Soviet future. Because these peoples were at the crossroads of Eurasia for millennia, their myths exhibit striking parallels with the lore of ancient India, classical Greece, and pagan Scandinavia. The Nart sagas may also have formed a crucial component of the Arthurian cycle. Notes after each tale reveal these parallels; an appendix offers extensive linguistic commentary. With this book, no longer will the analysis of ancient Eurasian myth be possible without a close look at the Nart sagas. And no longer will the lover of myth be satisfied without the pleasure of having read them. Excerpts from the Nart sagas The Narts were a tribe of heroes. They were huge, tall people, and their horses were also exuberant Alyps or Durduls. They were wealthy, and they also had a state. That is how the Narts lived their lives. . . . The Narts were courageous, energetic, bold, and good-hearted. Thus they lived until God sent down a small swallow. . . . The Narts were very cruel to one another. They were envious of one another. They disputed among themselves over who was the most courageous. But most of all they hated Sosruquo. . . . A rock gave birth to him. He is the son of a rock, illegally born a mere shepherd's son. . . . In a new introduction, folklorist Adrienne Mayor reflects on these tales both in terms of the fascinating warrior culture they depict and the influence they had on Greco-Roman mythology.

From the Back Cover There is no comparable book in English. The translation looks quite fine! This is quite original work by one of the most prominent scholars of the Caucasus in this hemisphere, one who is also most knowledgeable in Indo-European mythology and is an accomplished linguist. --Edgar C. Polomé, author of Indo-European Religion after Dumezil and Language, Society, and Paleoculture Reminiscent of the Grimm fairytales and the Icelandic Eddas, these lively tales abound with giants and witches and dwarves and mountain-sized monsters born of rock, ice, and fire. This is a major new resource for students in mythology, linguistics, and folklore, for which John Colarusso provides a sober and expert commentary as guide. --Elizabeth Wayland Barber, author of The Mummies of Urumchi This book will introduce a wide readership to a unique and ancient relic of human lore still tenaciously preserved in the North Caucasus--a fabulous world of gods and goddesses, demigods and antigods, monsters and ogres, giants and lilliputians, witches and warlocks, Caucasian Medusas and tree-ladies. Further, it is timely in that the Northwest Caucasians are stirring from a long slumber and are grappling to reforge their identity and find their place in the comity of nations. Professor Colarusso has rendered this culture a great service, enriching world culture in the process. --Amjad Jaimoukha, author of The Circassians: A Handbook The translations offered by Colarusso include fascinating, strange, and sometimes grotesque mythic tales that show amazing parallels with Classical and other Indo-European stories. The characters are enormously interesting, especially the figure of Satanya, a powerful female heroine/goddess, which will have an instant appeal to those, scholars and general readers alike, now discovering Goddess myths. As pure narratives, these stories, with their tales-within-tales, giants, stolen brides, and wise elders, also command attention. --Richard P. Martin, Stanford University Reading this book was an exciting intellectual experience. These tales are extremely rich and thought-provoking. Doubtless many other readers will respond just as enthusiastically as I have, and recognize the importance of the Nart corpus--and Colarusso's commnentary on it--for their own research. This represents the first compendium in any language, to my knowledge, of Nart sagas from all of the Northwest-Caucasian-speaking peoples. --Kevin Tuite, Université de Montréal