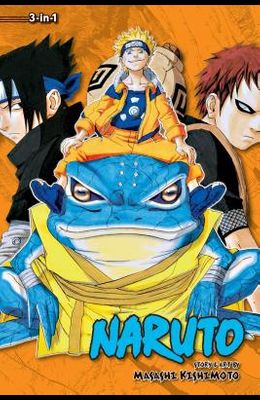 Book #5 in the Naruto: Omnibus Series
by
Masashi Kishimoto

The world's most popular ninja comic just got bigger with this collection of Naruto volumes Naruto is a young shinobi with an incorrigible knack for mischief. He's got a wild sense of humor, but Naruto is completely serious about his mission to be the world's greatest ninja Containing volumes 13, 14 and 15 of Naruto The final battle of the Chunin Exam is at hand, with Sasuke and Gaara facing off in the arena. Later, Naruto, Sakura and Shikamaru are on a top priority mission to track down Sasuke and the Sand ninja. Back at the village, the Third Hokage is still trapped in Orochimaru's impenetrable barrier. And the tension between Naruto and Gaara builds. As Gaara continues to mutate, Naruto prepares for the fight of his life Reads R to L (Japanese Style) for teen audiences.