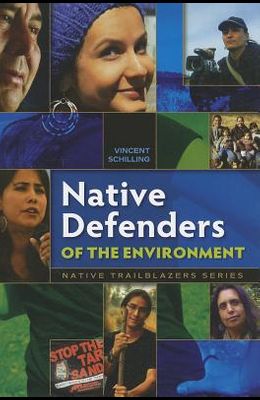 Native Defenders of the Environment

Part of the Native Trailblazers Series
by
Vincent Schilling

From the Native Trailblazers series comes a new book with the stories of twelve brave people who work tirelessly to save our environment. These are stories of courage, determination and resistance to multinational corporations and disastrous government policies that are harming the planet. Readers will learn about Grace Thorpe, who worked to keep Native reservations from becoming nuclear waste dumps; Tom Goldtooth, the director of the Indigenous Environmental Network; and Winona LaDuke, who works on a national level to raise public support and create funding for Native environmental groups. Read about the next generation of Native environmentalists, including Ben Powless, a founding organizer of the Canadian Youth Climate Coalition; Melina Laboucan-Massimo, tar sands campaigner for Greenpeace Canada; and Teague Allston, an intern with the National Wildlife Federation tribal and public lands program.