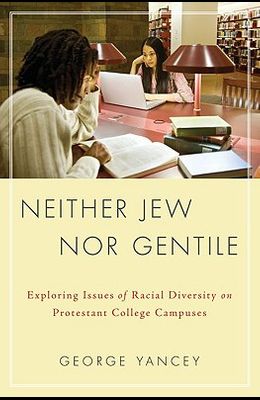 Neither Jew Nor Gentile: Exploring Issues of Racial Diversity on Protestant College Campuses

In recent years, Protestant churches and denominations have become increasingly concerned with issues of racial diversity and reconciliation. Recent scholarship has examined this growing awareness, but has seldom attended to issues of diversity on the campuses and seminaries that educate the leaders of these churches and denominations: campuses and seminaries which have, historically, enrolled fewer students of color than nonsectarian institutions. George Yancey explores the methods that Protestant colleges and universities use to promote racial diversity, as well as the attitudes of the white and non-white students on their campuses. He shows that certain measures, such as diversity courses and student-led multicultural organizations, are more effective for promoting than multicultural and anti-racism programs. He also shows that the presence of faculty of color supports efforts towards racial diversity on Protestant campuses. Neither Jew Nor Gentile not only documents which institutional measures are effective, but shows how and why they work. Yancey finds that efforts to encourage interracial communication and unity promote a positive atmosphere more effectively than measures that emphasize differences among racial groups, and that dialogue among racial groups appears to be essential for the development of a positive racial atmosphere on campus. He outlines ways of cultivating such a dialogue and offers advice to educators on handling issues of racial diversity. While Neither Jew Nor Gentile focuses on Protestant campuses, this study will benefit all educators who seek to understand and foster racial diversity on their campuses.