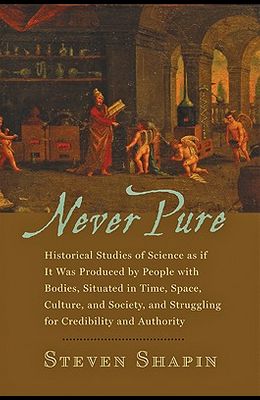 Never Pure: Historical Studies of Science as If It Was Produced by People with Bodies, Situated in Time, Space, Culture, and Socie

Steven Shapin argues that science, for all its immense authority and power, is and always has been a human endeavor, subject to human capacities and limits. Put simply, science has never been pure. To be human is to err, and we understand science better when we recognize it as the laborious achievement of fallible, imperfect, and historically situated human beings. Shapin's essays collected here include reflections on the historical relationships between science and common sense, between science and modernity, and between science and the moral order. They explore the relevance of physical and social settings in the making of scientific knowledge, the methods appropriate to understanding science historically, dietetics as a compelling site for historical inquiry, the identity of those who have made scientific knowledge, and the means by which science has acquired credibility and authority. This wide-ranging and intensely interdisciplinary collection by one of the most distinguished historians and sociologists of science represents some of the leading edges of change in the scholarly understanding of science over the past several decades.