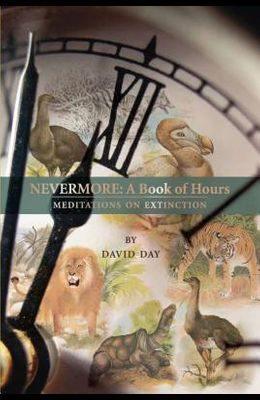 Nevermore: A Book of Hours

NEVERMORE: A Book of Hours is a distillation of thirty years of research and meditation by author and poet David Day, an acknowledged authority on the extinction of species. In its conception and approach, NEVERMORE is unlike any other natural history. It is shot through with a combined sense of wonder and savagery in vivid first encounters and last glimpses of each of these now vanished species. Its commentaries are a treasure trove of historic events and insights to be found nowhere else. And, through its elegies, a profoundly human response to this legacy is revealed. In NEVERMORE: A Book of Hours, we see how the fates of animals are linked to human history: Julius Caesar with the Aurochs, Marco Polo with the Elephant Bird, Christopher Columbus with the Eskimo Curlew, John Cabot with the Great Auk, Jacques Cartier with the Passenger Pigeon, Vitus Bering with the Steller Sea Cow, Charles Darwin with the Antarctic Wolf. NEVERMORE: A Book of Hours is a modern bestiary and a book of remembrance. It is beautifully illustrated by four distinguished wildlife artists; and is a tribute and requiem to vanished species. Creatures that are now as much mythical animals as the dragon and the unicorn; and can be found in the only place they may now exist: in the human imagination.

Books similiar to Nevermore: A Book of Hours

List of All Editions of Nevermore: A Book of Hours