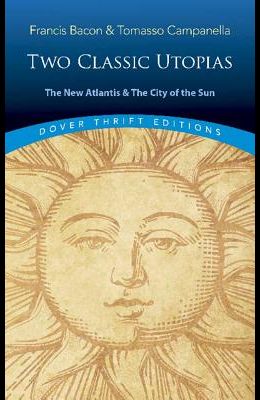 New Atlantis and the City of the Sun: Two Classic Utopias

by
Francis Bacon and Tomasso Campanella and Gregory Claeys

In keeping with the inquisitive spirit of their times, two 17th-century writers envisioned their own philosophical and intellectual utopias. Tomasso Campanella, a Calabrian monk, published The City of the Sun in 1623, and Francis Bacon's The New Atlantis appeared in 1627. Campanella was a student of logic and physics; Bacon focused on politics and philosophy. Despite differences in setting and treatment, both authors employed the latest methods of scientific experimentation to restructure the social order, and both works abound in imaginative thought and expression. Campanella formulated the first scientifically based socialistic system -- one that furnished a model for subsequent ideal communities. Bacon focused on the duty of the state toward science, and his projections for state-sponsored research anticipated many advances in medicine and surgery, meteorology, and machinery. Both of these classics mirror their period's idealism and its revolutionary trends in thought.