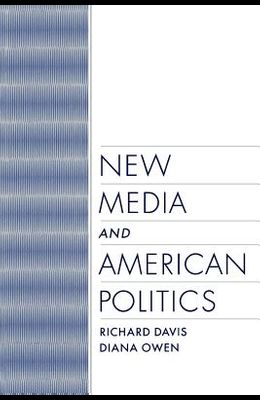 by
Richard Davis and Diana Owen

New media have a major impact on all aspects of American political life. Presidential candidates appear in electronic town meetings; talk show hosts like Rush Limbaugh and G. Gordon Liddy lead dedicated bands of followers; tabloids break the Monica Lewinsky scandal with alarming speed. Traditional sources of information are increasingly altered by the presence of new media. New Media and American Politics is the first survey by political scientists of this recent and still-emerging phenomenon. The book is broadly cast to cover talk radio and television, tabloid journalism both in print and on television, entertainment media, and computer networks. How much do the new media alter the content of American politics, and influence how issues are raised, discussed, and resolved? Who uses new media and why? What are the political orientations of new media audiences? The authors address each of these questions, but more importantly they provide a framework for further examination of the new media's overall impact on politics. The first of its kind, this book will appeal to political scientists, journalists, scholars and students of Communications, and general readers interested in how new technologies are changing our political system.