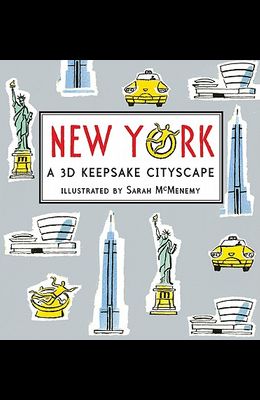 Part of the Panorama Pops Series
by
Sarah McMenemy

Take a piece of the city home with you Revisit twelve of New York City's most famous sites with this delightful cutpaper, accordion-fold novelty. New York, New York -- the city that never sleeps is known for its superlatives. From the world's largest indoor theater to the railway station with the most platforms anywhere, from the first iron-wire suspension bridge to one of the earth's most recognizable symbols of hope and freedom, New York City's many attractions are among the most popular destinations of all time. Now you can fold out this exquisite keepsake and explore a dozen of the city's beloved landmarks, including the Empire State Building, Central Park, Macy's, Yankee Stadium, the Guggenheim Museum, the Flatiron Building, the Plaza Hotel, and more. Illustrated in Sarah McMenemy's signature style, this stand-alone novelty folds back into a stylish slipcase when the tour is done.