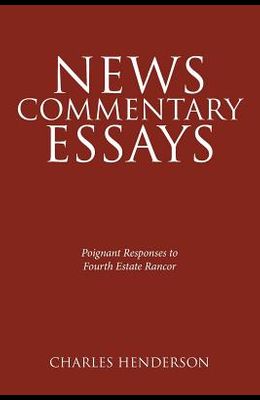 The years 2013 to 2015 were significant in American history because they were filled with news stories about epic and, sometimes controversial, events. Those include the wars in Afghanistan and Iraq, coupled with the Republicans' relentless criticism of Obama's handling of the same, the Supreme Court's ruling in favor of same-sex marriage, which produced an unprecedented social upheaval, and most importantly, the Edward Snowden affair, which resulted in the unauthorized release of US top-secret documents that caused incalculable damage to America's national security. In the midst of it all was The Washington Post, a widely recognized newspaper with liberal leanings but mostly conservative syndicated op-ed columnists. Charles Henderson, a creative writer with a strong grounding in biblical scripture, challenges many of The Post's articles, op-eds, and editorials by means of his book titled News Commentary Essays - Poignant Responses to Fourth Estate Rancor. This book contains over four hundred essays, covering eighteen topics, including religion, foreign and domestic policy, politics, same-sex marriage, morality, etc. The author's goal is to entertain and yet bring reasoned insight into complex political policy and social issues-many of which could be solved by a search of a biblical scripture.