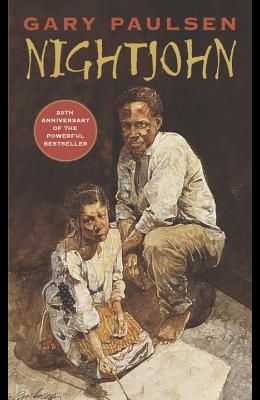 Book #1 in the Sarny Series
by
Gary Paulsen

In this searing picture of slavery (Kirkus Reviews),12-year-old slave Sarny risks terrible punishment as Nightjohn, an adult slave, teaches her how to read. An inspirational story, meticulously researched, and historically accurate.

From the front Cover To know things, for us to know things, is bad for them. We get to wanting and when we get to wanting it's bad for them. They thinks we want what they got . . . . That's why they don't want us reading. --Nightjohn I didn't know what letters was, not what they meant, but I thought it might be something I wanted to know. To learn. -- Sarny Sarny, a female slave at the Waller plantation, first sees Nightjohn when he is brought there with a rope around his neck, his body covered in scars. He had escaped north to freedom, but he came back--came back to teach reading. Knowing that the penalty for reading is dismemberment Nightjohn still retumed to slavery to teach others how to read. And twelve-year-old Sarny is willing to take the risk to learn. Set in the 1850s, Gary Paulsen's groundbreaking new novel is unlike anything else the award-winning author has written. It is a meticulously researched, historically accurate, and artistically crafted portrayal of a grim time in our nation's past, brought to light through the personal history of two unforgettable characters.