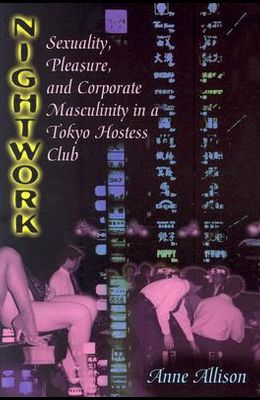 In Nightwork , Anne Allison opens a window onto Japanese corporate culture and gender identities. Allison performed the ritualized tasks of a hostess in one of Tokyo's many hostess clubs pouring drinks, lighting cigarettes, and making flattering or titillating conversation with the businessmen who came there on company expense accounts. Her book critically examines how such establishments create bonds among white-collar men and forge a masculine identity that suits the needs of their corporations. Allison describes in detail a typical company outing to such a club-what the men do, how they interact with the hostesses, the role the hostess is expected to play, and the extent to which all of this involves play rather than work. Unlike previous books on Japanese nightlife, Allison's ethnography of one specific hostess club (here referred to as Bijo) views the general phenomenon from the eyes of a woman, hostess, and feminist anthropologist. Observing that clubs like Bijo further a kind of masculinity dependent on the gestures and labors of women, Allison seeks to uncover connections between such behavior and other social, economic, sexual, and gendered relations. She argues that Japanese corporate nightlife enables and institutionalizes a particular form of ritualized male dominance: in paying for this entertainment, Japanese corporations not only give their male workers a self-image as phallic man, but also develop relationships to work that are unconditional and unbreakable. This is a book that will appeal to anyone interested in gender roles or in contemporary Japanese society.