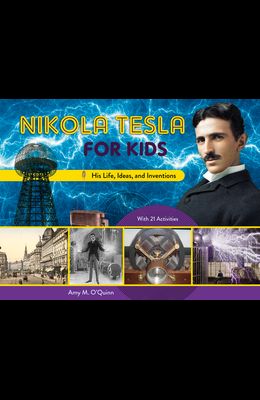 Nikola Tesla for Kids: His Life, Ideas, and Inventions, with 21 Activities

Finalist for the 2020 AAAS / Subaru SB&F Excellence in Science Book exemplify outstanding and engaging science writing and illustration for young readers Nikola Tesla was a physicist, electrical engineer, and world-renowned inventor whose accomplishments faded into oblivion after his death in 1943. Some considered this eccentric visionary to be a mad scientist, but many of his ideas and inventions that were deemed impossible during his lifetime have since become reality. He is now acknowledged to have invented the radio ahead of Marconi. Tesla was undeniably eccentric and compulsive. Among other things, Tesla developed generators, fluorescent tubes, neon lights, and a small remote-controlled boat. He also helped design the world's first hydroelectric plant at Niagara Falls. Nikola Tesla for Kids is the story of Nikola Tesla's life and ideas, complete with a time line, 21 hands-on activities, and additional resources to better understand his many accomplishments.Kids will: Construct an electric circuit Explore Tesla's birthplace online Investigate the nature of electromagnetic waves Mix up batch of fluorescent slime Visit the 1893 World's Columbian Exposition Build a soda bottle submarine And more