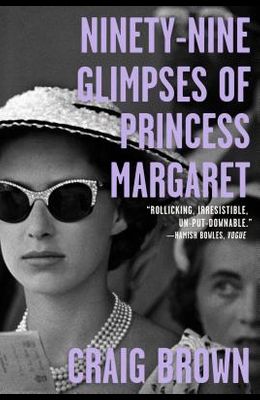 Rollicking, irresistible, un-put-downable . . . For anyone . . . who swooned to Netflix's The Crown , this book will be manna from heaven. --Hamish Bowles, Vogue Ninety-Nine Glimpses of Princess Margaret is a brilliant, eccentric treat. --Anna Mundow, The Wall Street Journal I ripped through the book with the avidity of Margaret attacking her morning vodka and orange juice . . . The wisdom of the book, and the artistry, is in how Brown subtly expands his lens from Margaret's misbehavior . . . to those who gawked at her, who huddled around her, pens poised over their diaries, hoping for the show she never denied them. --Parul Sehgal, The New York Times Brown has done something astonishing: He makes the reader care, even sympathize, with perhaps the last subject worthy of such affection . . . His book is big fun, equal measures insightful and hysterical. --Karen Heller, The Washington Post A witty and profound portrait of the most talked-about English royal She made John Lennon blush and Marlon Brando tongue-tied. She iced out Princess Diana and humiliated Elizabeth Taylor. Andy Warhol photographed her. Jack Nicholson offered her cocaine. Gore Vidal revered her. Francis Bacon heckled her. Peter Sellers was madly in love with her. For Pablo Picasso, she was the object of sexual fantasy. Princess Margaret aroused passion and indignation in equal measures. To her friends, she was witty and regal. To her enemies, she was rude and demanding. In her 1950s heyday, she was seen as one of the most glamorous and desirable women in the world. By the time of her death in 2002, she had come to personify disappointment. One friend said he had never known an unhappier woman. The tale of Princess Margaret is Cinderella in reverse: hope dashed, happiness mislaid, life mishandled. Such an enigmatic and divisive figure demands a reckoning that is far from the usual fare. Combining interviews, parodies, dreams, parallel lives, diaries, announcements, lists, catalogues, and essays, Craig Brown's Ninety-Nine Glimpses of Princess Margaret is a kaleidoscopic experiment in biography and a witty meditation on fame and art, snobbery and deference, bohemia and high society.

List of All Editions of Ninety-Nine Glimpses of Princess Margaret