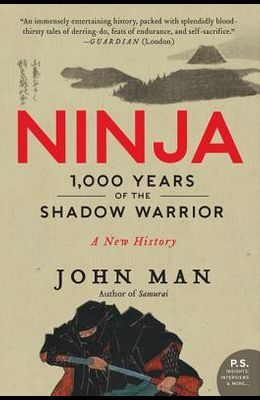 Ninja: 1,000 Years of the Shadow Warrior

The first major pop history of the Japanese stealth assassins, John Man's Ninja is a meticulously researched, entertaining blend of mythology, anthropology, travelogue, and history of the legendary shadow warriors. Spies, assassins, saboteurs, and secret agents, Ninja have become the subject of countless legends that continue to enthrall us in modern movies, video games, and comics--and their arts are still practiced in our time by dedicated acolytes who study the ancient techniques. Ninja: 1,000 Years of the Shadow Warrior, by British historian John Man, is as colorful and intriguing as the warriors it so vividly brings to life.

From the Back Cover Out of the violent chaos of medieval Japan, a remarkable band of peasants rose to become the world's most feared warriors--trained to perfect the art of ninjutsu , the deadly union of martial arts and deception. Today, however, these real life ninjas are overshadowed by legend and pop culture caricatures. Could they fly? Climb walls? Make themselves invisible? Drawing on a wealth of historical texts, local Japanese sources, and his own comprehensive treks across Asia, acclaimed author John Man takes us back to the ninjas' origins in China, through to their heyday in the bloody civil wars that ended with the unification of Japan in 1600. Man also illuminates the twentieth-century reemergence of the Japanese tradition of shadow warfare through the Nakano Spy School--the elite military-intelligence academy that operated as an extensive spy network during World War II--and reveals one former Nakano soldier, Onoda Hiroo, who may be the last surviving ninja. Compelling and absorbing, Ninja reveals at last the fascinating true history behind one of the world's most enduring legends.