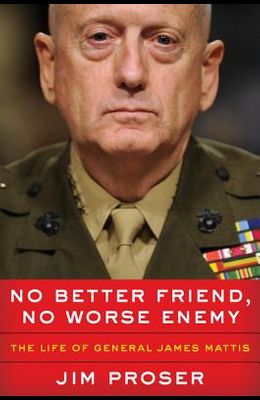 No Better Friend, No Worse Enemy: The Life of General James Mattis

From the Back Cover CBS HOST JOHN DICKERSON: What keeps you awake at night? SECRETARY OF DEFENSE JAMES MATTIS: Nothing. I keep other people awake at night. In the hyperpartisan political atmosphere of 2017, General James Mattis astonishingly received nearly unanimous bipartisan support for his nomination for Secretary of Defense. What is it about Mattis that generates such respect and appreciation across the political spectrum? In this illuminating biography, Jim Proser takes readers through the general's illustrious career, featuring firsthand accounts of his running some of the most significant military engagements in recent American history. Readers will understand what it feels like to work for, and fight alongside, this remarkable figure. Mattis is a devout student of history and an erudite reader, revered by rank-and-file Marines, officers, academics, politicians, and civilians alike. In 2003, he shared a message in his Eve of Battle Speech with the men and women under his command in the 1st Marine Division, outlining their responsibilities. Emphasizing the importance of the mission and the goal to act with honor, Mattis ended with the motto he had adapted from another great figure, Roman general Lucius Cornelius Sulla: Demonstrate to the world that there is 'No Better Friend, No Worse Enemy' than a U.S. Marine. Chronicling how Mattis's martial and personal values have elevated him to the highest levels of personal success and earned him the trust of a nation, Proser proves that America is stronger because of the secretary's service and his example.